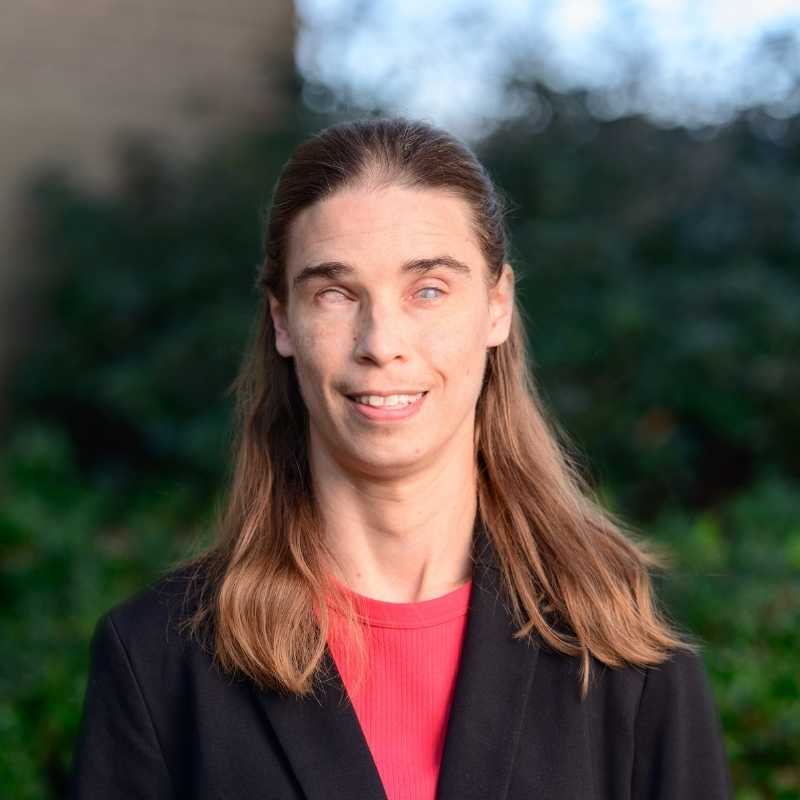 Reba has been working with and for people with disabilities for over 15 years. She comes to Able from a background in social work and human services. She received her Bachelor’s in Anthropology from the University of South Carolina, and her Master’s in Social Work from the University of Pittsburgh, where she specialized in Community organizing and social administration. Reba has previously worked for the state of California as a generalist Rehabilitation Counselor, as well as an Independent Living Coordinator at Community Resources for Independent Living, also in California.

Legally blind from birth, Reba grew up utilizing accommodations for both those with total blindness and those with low vision. From a very early age, Reba was aware of two things—her eyes looked different from other people’s, and upon seeing her eyes, people made decisions about her life and abilities that were not always correct, and often based on misinformation. Although frustrating, this helped Reba to learn from an early age that she really was the best expert on herself and her disability. When she was diagnosed with a chronic orthopedic health condition as an adult, she was reminded once again that only she could correctly assess her own abilities and limitations.

It was after this diagnosis that Reba decided to follow through on an idea that had been brewing in the back of her mind ever since she entered the workforce with her Bachelor’s degree, “I have experienced going through systems developed by people without disabilities to manage those of us with disabilities. Sometimes they are supportive of personal growth and responsibility, and sometimes not. As I thought of what it was like to navigate a world that thought of disability as an afterthought, I could not help thinking of how lonely I had felt. It was not until I made connections with people—both disabled and nondisabled—who saw me as a whole person, rather than just my disability, that I truly felt connected to others and like an equal participant in the world. That is why I chose to go into social work, and always be attached to disability services in some way or another—I want to support people to grow and learn that they are not alone and that there is a place for them in their world, and they have the power to make it happen.”

Reba lives in Columbia and is an avid reader of most things fiction, as well as a few nonfiction topics depending on what catches her interest. She loves hiking and being outdoors. She is working her third Seeing Eye dog, a male black Labrador Retriever.

November 29, Give to Able SC for Giving Tuesday!

You can be a part of Able South Carolina’s Story Able SC:…